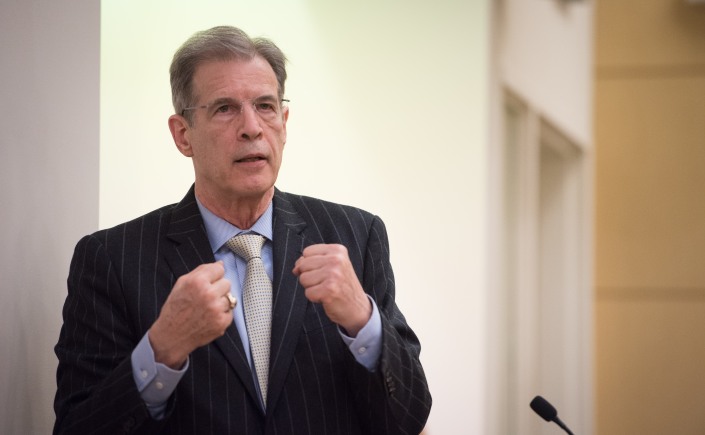 Earlier this month, we held our annual China-U.S. Symposium on April 13th-14th. This symposium was composed of four panels, a lecture, and a keynote speech by Singaporean Ambassador to the United States Dr. Ashok Kumar Mirpuri.

Dr. William H. Overholt is the ​President of Fung Global Institute, a Senior Research Fellow at John F. Kennedy School of Government, and the Principal of AsiaStat LLC. Prior to his current endeavors, Dr. Overholt has also worked in the private sector, having worked in investment banking for 21 years. Dr. Overholt has also published numerous books, with his most recent work titled “China’s Crisis of Success” (Cambridge University Press, 2017). This recent publication inspired Dr. Overholt’s lecture at the China-U.S. Symposium in which he shed light on China’s economic condition and the challenges China and the U.S. may face in the future.

Dr. Overholt opened the lecture recounting his process of writing “The Rise of China” (W.W. Norton, 1993) which was the first book to predict China’s success in the realm of economics and geopolitics. Dr. Overholt drew upon his knowledge of Asian economic development when comparing present China to South Korea and Taiwan’s miracle economic rises before inevitably facing difficulties including massive debt and powerful political interest groups asserting their will. Following this comparison, Dr. Overholt detailed how former Premier Zhu Rongji’s political and economic reforms were initially disliked, but later appeared to be prescient in the era of former General Secretary Hu Jintao and Wen Jiabao.

Sharing his insight into the significance of current General Secretary Xi Jinping’s crackdown on corruption, Dr. Overholt expressed his view that these are not the actions taken by a confident leader, but instead that they display the instability in China that could create conditions for negative outcomes such as potential capital flight.

Following his lecture, Dr. Overholt drew upon his wealth of private sector and academic experience when answering undergraduate and visitors’ questions. When asked by a student his views on Chinese investment in African nations and concerns of neocolonialism, Dr. Overholt spoke on his views of Beijing’s One Belt One Road initiative as a net positive for nations partnering with China, while also drawing attention to the potential threat of large debt accumulation by partner nations.

SURGE would like to once again thank the Institute of Global Leadership and the rest of the Tufts community for its invaluable support.