SURGE is committed to spreading knowledge and educating students about China U.S. relations not only through the China U.S. Symposium but through a number of different events. Below is a list of our past guest lectures and discussions.

SURGE has the honor of hosting MIT Professor Emma J. Teng’s for our Fall book talk. She will present on and about the topics within her book titled “Eurasian: Mixed Identities in the United States, China, and Hong Kong,” after which a discussion will be held.

“The United States has been the world’s dominant power for more than a century. Now many analysts believe that other countries are rising and the United States is in decline. Is the unipolar moment over? Is America finished as a superpower?”

SURGE is pleased to co-host its faculty advisor, Prof. Michael Beckley with the Tufts International Relations Program, for its second fall speaker event of the semester. Prof. Beckley will be speaking about major themes in his new book, “Unrivaled” that was recently published in September 2018. Come join us for an unrivaled night of learning!

This year marks the 40th anniversary of the signing of the Treaty of Sino-Japanese Peace and Friendship. On this special occasion, Tufts Sino-U.S. Relations Group Engagement (SURGE) cordially invite you and your organization to our Fall Speaker series to review the Sino-Japanese relationship and its profound implications on the international order.

We are honored to have Professor Richard Samuels as our speaker this fall. Professor Samuels is a Ford International Professor of Political Science and director of the Center for International Studies at MIT. He has been head of the MIT Political Science Department, Vice-Chair of the Committee on Japan of the National Research Council, and chair of the Japan-US Friendship Commission. He has also been elected to the American Academy of Arts & Sciences and was awarded an Imperial decoration by the Emperor of Japan and the Japanese Prime Minister. His articles and studies have been published in a wide range of academic journals. His books on Japanese foreign policy, the 2011 Tohoku catastrophe, and Machiavelli have won him a wide range of prestigious awards.

Tufts SURGE is proud to present its annual fall event. This year, we are pleased to have Robert Ross speak at our event on December 7, 2016, 7pm at the Crane Room, Paige Hall.

Robert Ross is Professor of Political Science at Boston College and Associate, John King Fairbank Center for Chinese Studies, Harvard University. He has testified before Senate and House committees and the Defense Policy Board Advisory Committee, and advises US government agencies on various policy actions. He has written publications, including: Chinese Security Policy: Structure, Power, and Politics, China’s Ascent: Power, Security, and the Future of International Politics, as well as has articles published in Foreign Affairs, Foreign Politics, The China Quarterly.

Dr. Ross will speak about the legacy of President Obama’s Pivot to Asia, before assessing the implications of Donald’s Trump electoral success on future Sino-US relations. 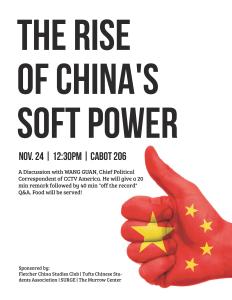 China’s growing influence in the world is indisputable. In recent years it has used political and economic means to project power in East Asia, Central Asia, and even as far as

Africa and Latin America. But how does it employ its soft power- cultural programs, educational exchanges, and new media- to influence other countries? Fletcher China Club, Tufts SURGE and Tufts CSA therefore co-produce The Rise of Chinese Soft Power, with Mr. Wang Guan, Chief Political Correspondent of CCTV America. He will discusses his views on the Rise of China’s Soft Power. The conversation will be honest, open, and “off the record.” 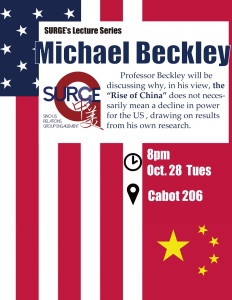 Professor Beckley (our wonderful SURGE Advisor) will be discussing why, in his view, the “Rise of China” does not necessarily mean a decline in power for the US. He will argue why resolving the question is crucial for US policy makers in order to effectively plan future decisions regarding US stance towards China, whether through economic constraint, or managing the rise of China via maintaining liberal economic policy. His own research has shown a trend discussing why the rise of China does not spell an end to US dominance, and the relatively beneficial outcomes of the current status quo, and he makes suggestions on how to best formulate US policy towards China based on empirical analysis. 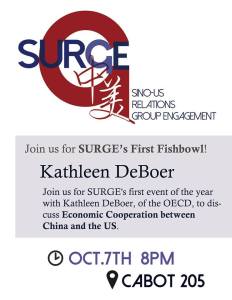 We will be hearing Kathleen DeBoer, Deputy Head of the Organization for Economic Co-Operation and Development’s Washington Center, discuss the increasingly relevant issue of economic cooperation between the US and China. She will be providing insight both through her work with the OECD and her time living and teaching in Nanjing, China. 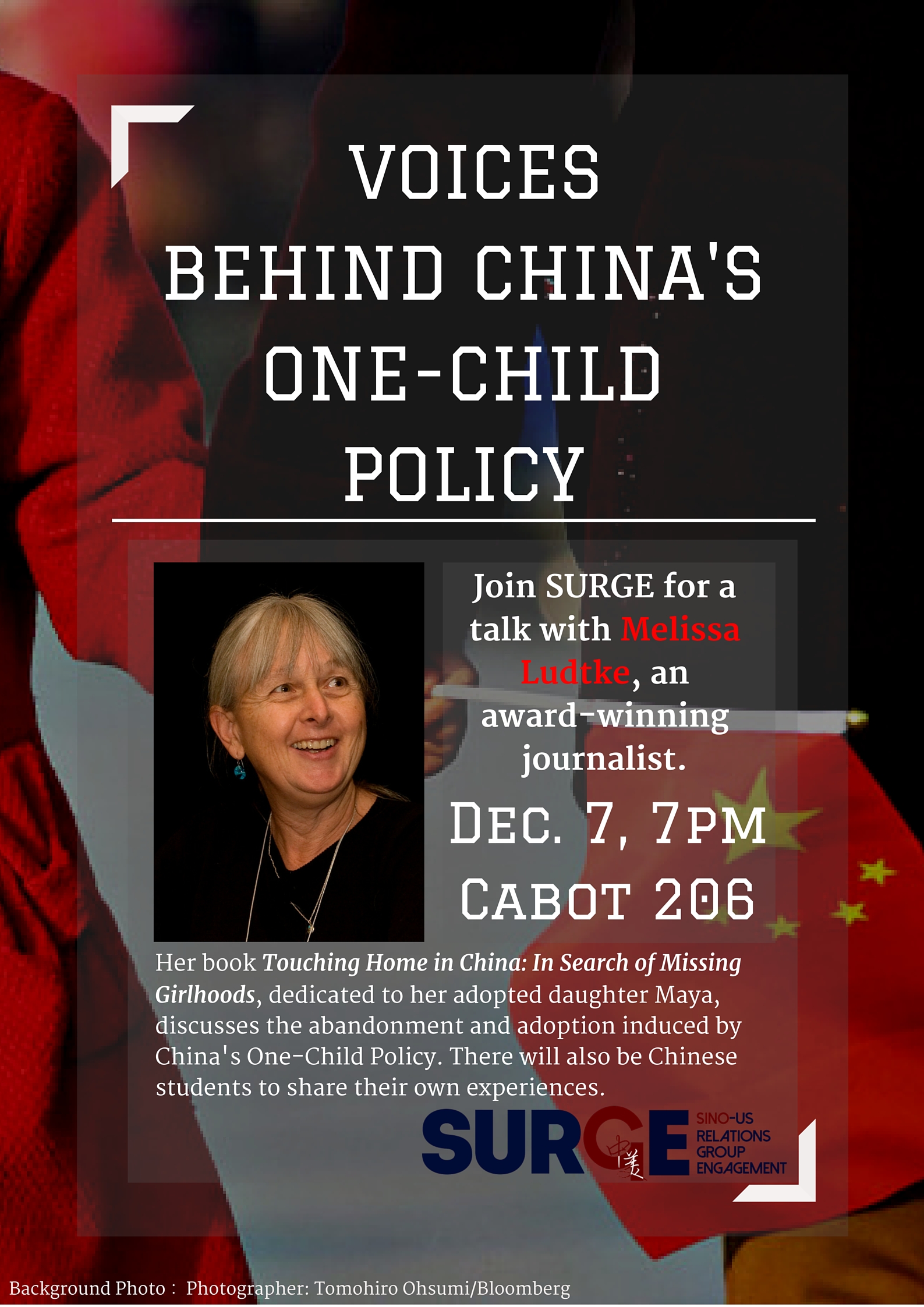 In the Culture Event hosted in December, SURGE conducted a discussion about the former One-Child Policy in China. We were honored to have Ms. Melissa Ludtke, an award-winning journalist and Yankee Quill Award winner, as our guest speaker. During the event, Ms. Ludtke talked about her book and education series: Touching Home in China, which is a project on the influence of the One-Child Policy, and the experience of her own beloved daughter Maya who was adopted from China. In addition to Ms. Ludtke, Jiahe Chi, a Chinese senior and former member of SURGE, shared his insights on how the policy changed the lifestyle and perspectives of urban and rural populations in China. 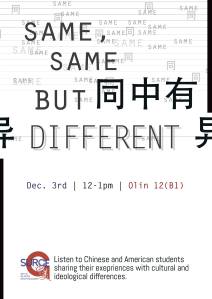 “Same, Same But Different” was held in Olin 11, during open block from 12 to 1pm on Wednesday, December 3rd. Four Chinese and American students who have lived in both China and America shared their experiences dealing with cultural and ideological differences between the two cultures. Their different backgrounds and stories offered insights on various aspects of Eastern and Western cultures, and was inspiring to those who have similar experiences and who are interested in studying abroad.